Coming in June: Grrrls on the Side 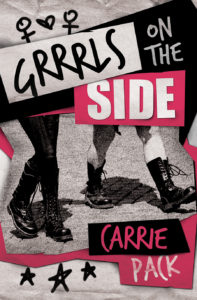 It’s an understatement to say I’m excited to finally talk about my debut YA novel, Grrrls on the Side. Check out the blurb below, and add it on Goodreads. If you’d like to stay up to date on my work, you can join my email list in the sidebar.

Grrrls on the Side will be available from Duet Books (the YA imprint of Interlude Press) June 8, 2017.