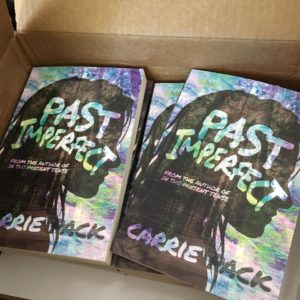 Ana Espinosa-Lawson is one of my favorite characters in the series. She’s morally gray and goes through quite a journey to find her own happiness. One of her flaws is her skepticism. She doubts Miles’s ability to time travel frequently and causes chaos as a result. In this flashback scene, Ana, whose personality was inpsired somewhat by my favorite dubious character, Dana Scully, shows us just how skeptical she can be.

“That’s what makes it good,” Monica said. She stuffed another handful of popcorn into her mouth.

“A girl who can control shit with her mind? That’s so dumb.” Ana thumbed through IMDB on her phone. She liked reading trivia about movies as she watched them, even if most of it was probably made up. “It’s not even the original.”

“The original is good too, but it’s so seventies. This version feels scarier to me.” Monica wiped her buttery fingers on her jeans and hit pause. “What’s up your butt?”

“Nothing. I just don’t believe all this paranormal bullshit.”

“You can’t suspend disbelief for a couple hours?”

Ana rolled her eyes. “Look, you may be my big sister, but you can’t make me like all the same dumb crap you like. Sorry.”

“No, I’m sorry I can’t get into all that weird marching band shit and be a giant nerd like you.”

Ana grabbed a handful of popcorn and tossed it in Monica’s face. “I’m sorry I have bigger boobs.”

Monica tossed her own popcorn missile in Ana’s direction. “Too bad you have the big feet to match!”

“We wear the same size.”

“Yeah, but I’m taller. Sorry Shaq, but you’re stuck with the freakishly large feet for life.” Another handful of popcorn landed in Ana’s hair as Monica cackled at her own joke.

A well-timed pillow strike cut off Monica’s laughter and the two wrestled until the bowl of popcorn spilled onto the floor.

“What are you girls doing?” their mother, Julia, shouted from upstairs.

“Well do it quietly, por favor,” Julia called. “We don’t need the neighbors calling the police.”

“Yeah, but it’s my pick, so you’re stuck with it.” And she pushed play.

Ana still couldn’t suspend disbelief enough to get into it. This girl gets bullied and she discovers she has telekinetic powers? Yeah, right.

Past Imperfect comes out this Thursday and I hope you’re as excited as I am. If you haven’t gotten into the award-winning In the Present Tense duology yet, what are you waiting for?

1 thought on “Past Imperfect – Deleted Scene”